Chiang Mai
After three nights in Bangkok we flew to Chiang Mai for another eight nights. Bangkok was an amazing place of which really, we seen a small part of. What struck us the most was the politeness and tolerance of the people maybe it has something to do with the Buddhist culture, the road traffic seemed to be manic with vehicles crossing on front of each other, motorcycles and tuk tuk's weaving in and out but there was no horns blaring in anger, everyone just made way for each other, also Bangkok must have one of the highest concentrations of scooters and motorcycles in the world.

In the evening after getting settled in to our hotel we went to a large street market where there was an abundance of exciting Thai food which we sampled, I also tried some milk from a fresh coconut but found it rather sickly. The market was busy and full of colour and buzzing with atmosphere. 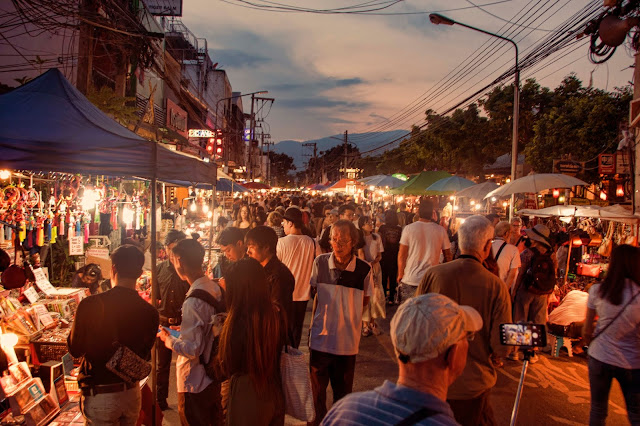 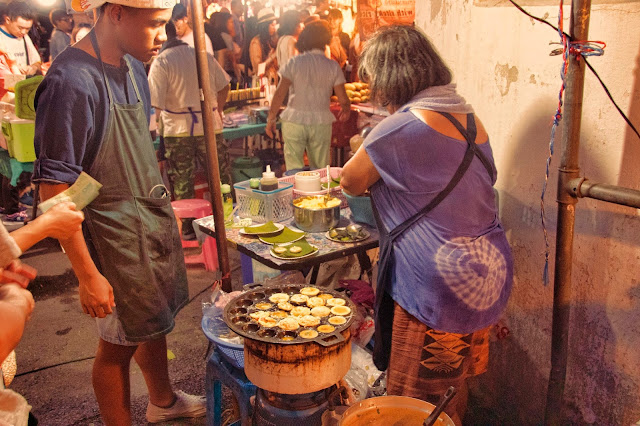 
Today was a true highlight of our trip, we went on an afternoon trip to an elephant sanctuary. This involved feeding and washing them but beforehand we were given an interesting talk on the creatures and their behaviour. These animals can never be returned to the wild as they are truly domesticated and are lovingly looked after by the young mahouts. It was interesting to learn, that when an elephant gives birth to a calf it is taken away from the mother for a while as the herd comes very protective of their young and makes it difficult for the keepers to approach them. In saying that they are true gentle giants of the animal world and it was good to see them being treated so well. 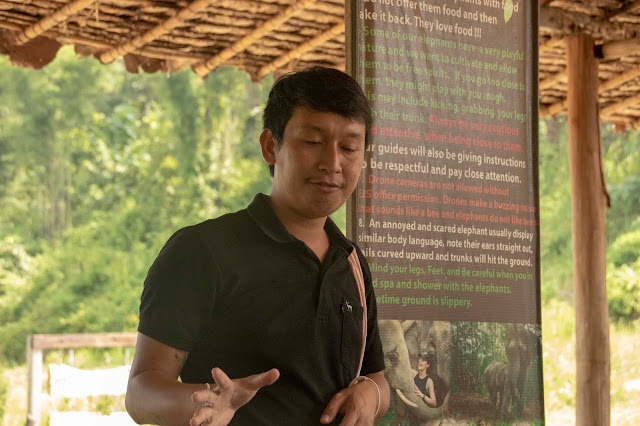 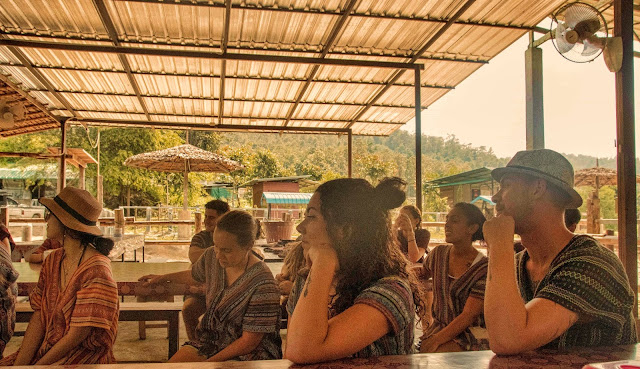 That done we proceeded feed them bananas and had to shout 'bon bon' for them to take the bananas through their mouth rather than their trunk, it was truly fun. The elephants were so full of character and mischief, it was just a pleasure to be in their company.....and if truth be known they are totally spoilt in a lovingly way, especially from their carers or mahouts. 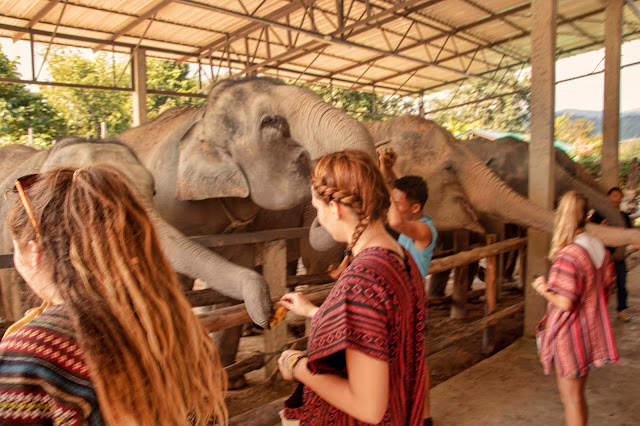 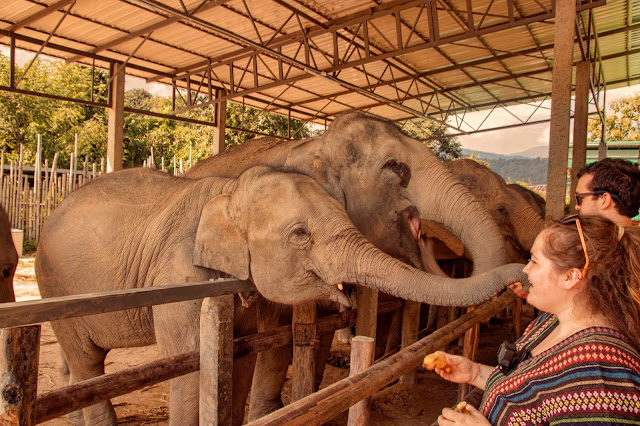 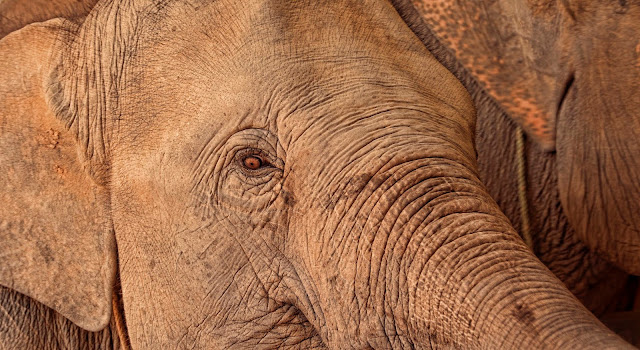 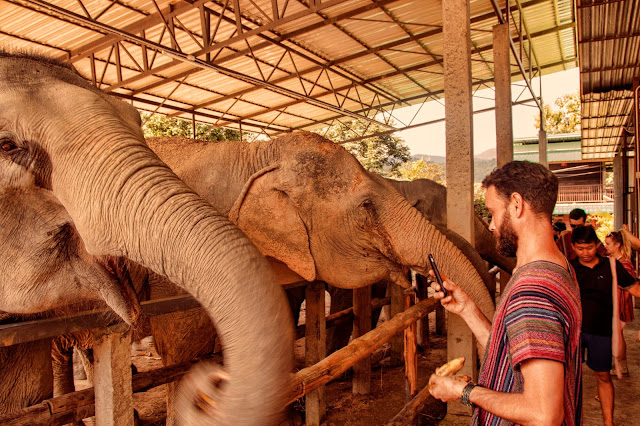 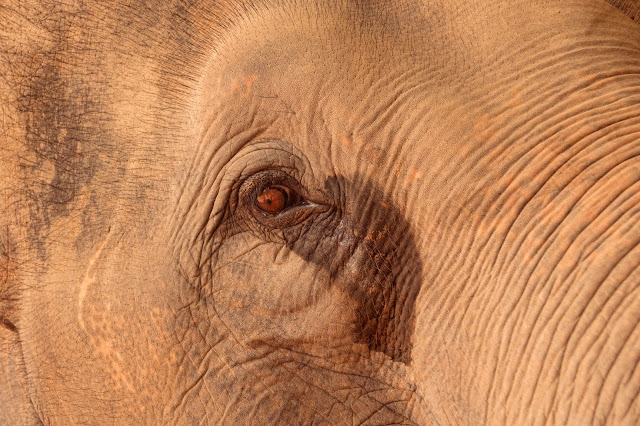 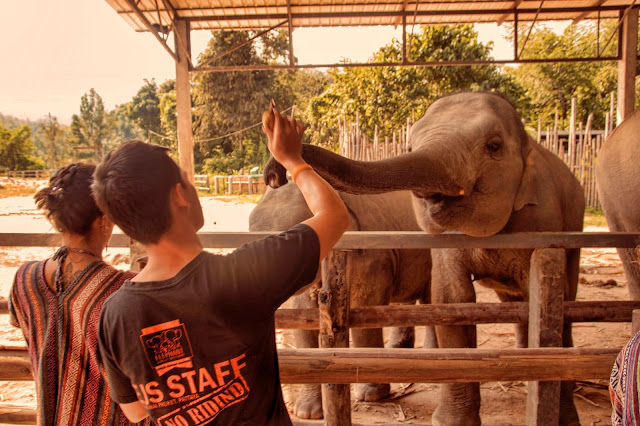 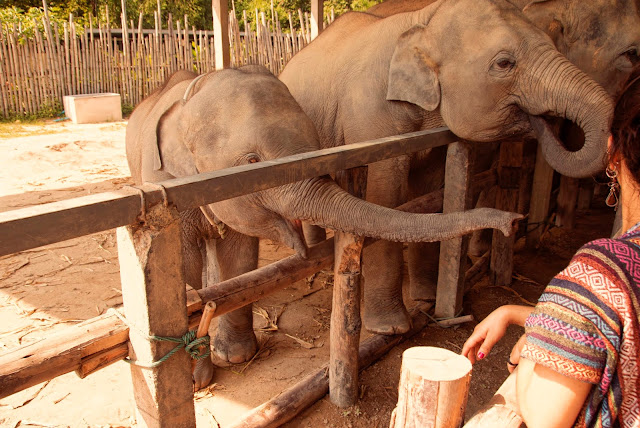 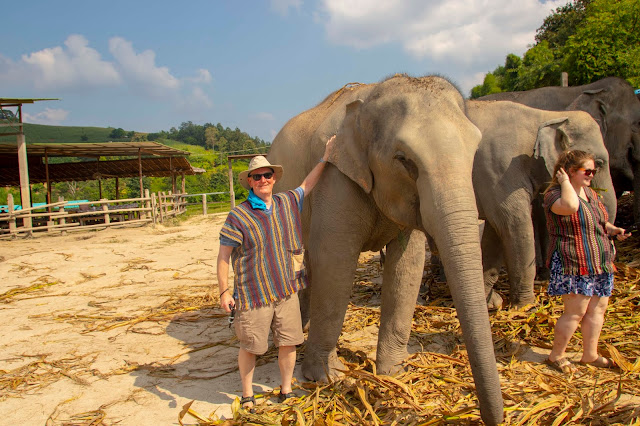 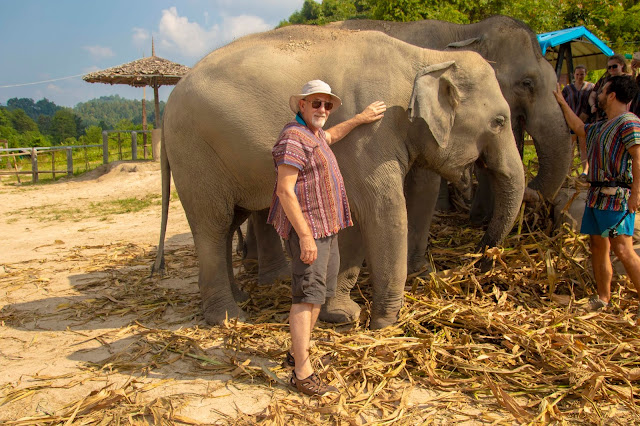 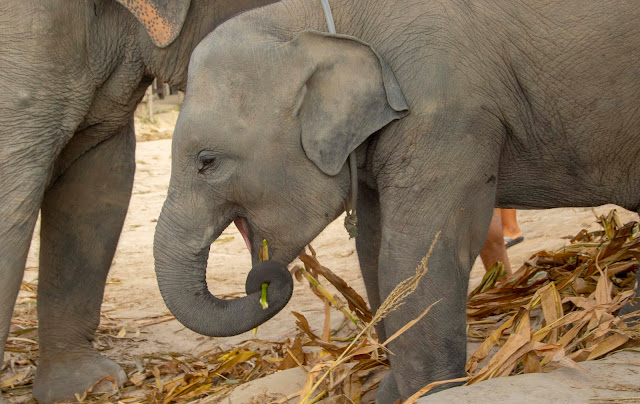 A forest of trunks and legs 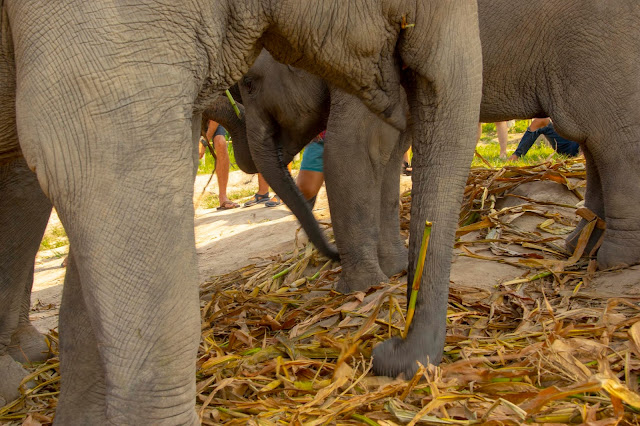 The young Mahouts keep an eye on the proceedings 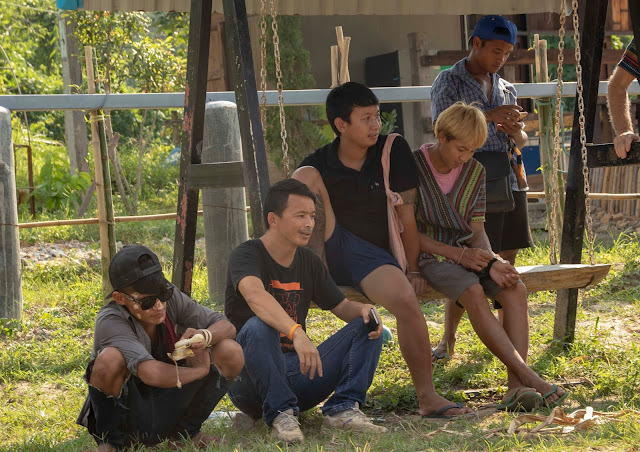 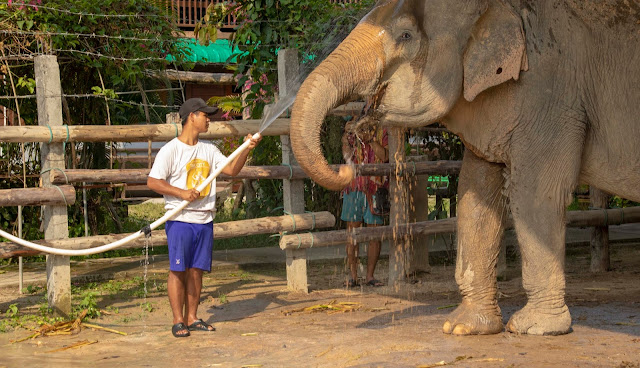 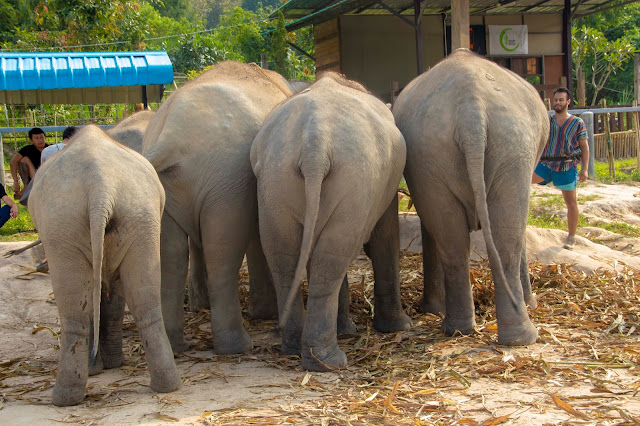 Later we went to a nearby pool were we washed them before heading to a wallow to give them a mud bath. 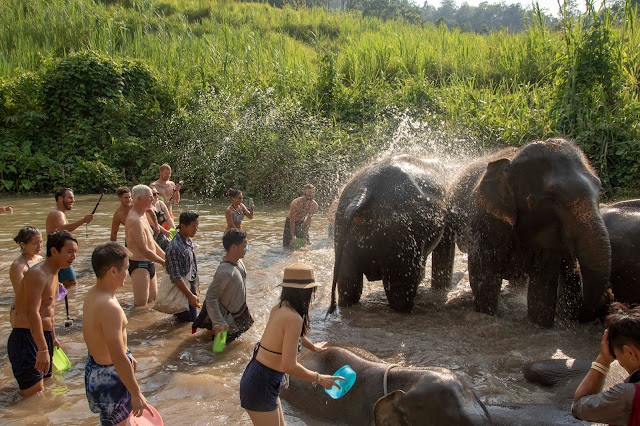 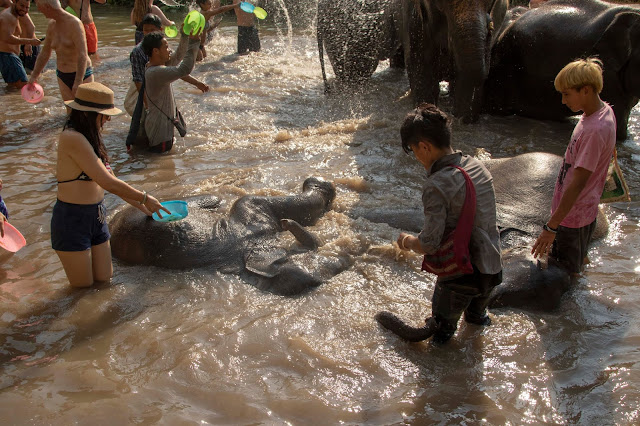 Everyone gets a shower. 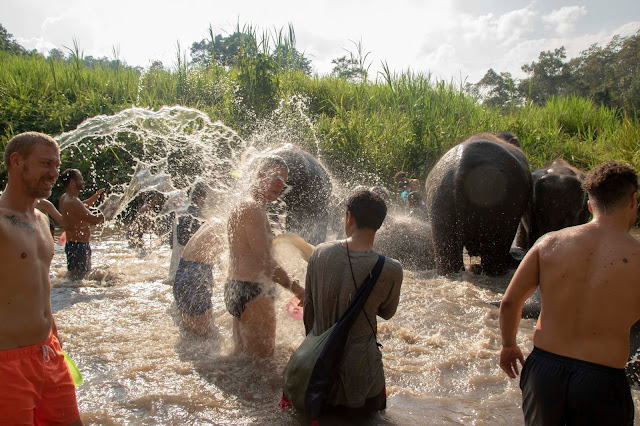 George joins in the fun. 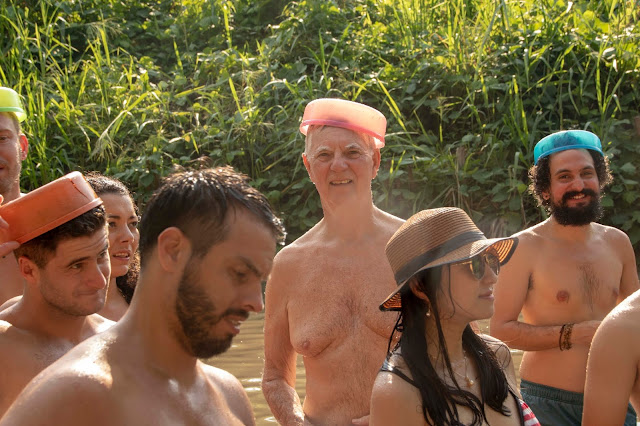 A mud bathe to keep off parasites. 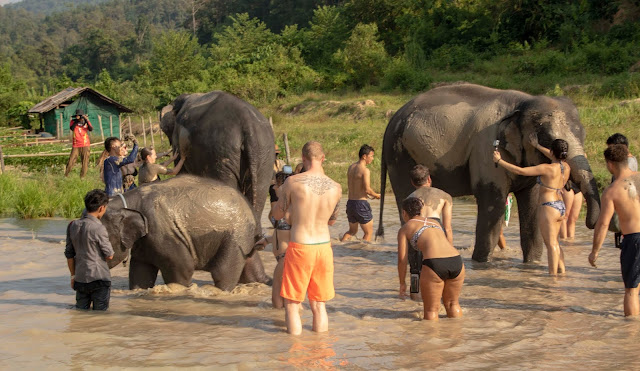 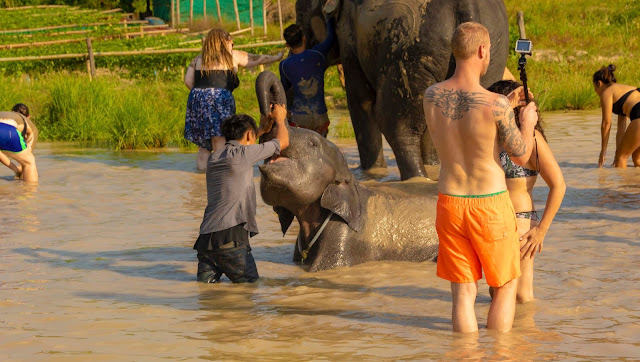 A stroll around the wallow to dry off. 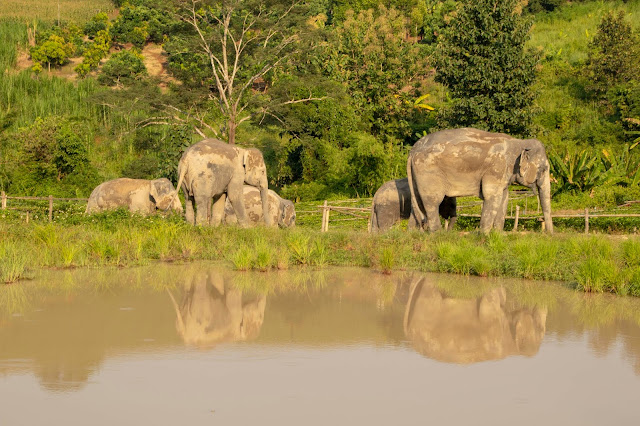 This was an exceptional day out with a lovely bunch of youngsters from all over the world and very much one ticked off my 'bucket list' and I would go as far as saying it was hopefully on a par with 'swimming with dolphins'.