Life on the Bird Feeder

My Luck Must Have Been In
Yesterday (Sunday) I set the camera up in the rear bedroom, and left it running for a while in the hope of getting something interesting. My luck must have been in because when I looked at it this morning I found the bird feeder had been visited by our elusive Nuthatch and it was captured for over two minutes on film. I was chuffed to bits as it is my favourite Passerine bird. I think it is possibly a male with the darker eye stripe but I may stand corrected on that. My task is now to capture the male Great Spotted Woodpecker.
A Pile of Ironing
The rest of the morning was spent waiting on phone calls so I passed some of time doing a pile of ironing that has been waiting to be done, then I pottered around in the garden for a while. Things were looking a bit worse of the wear due to all the rain we've had over the last couple of days but a good days sunshine and they'll all perk up again plus the water butts were full to capacity.
Young Swallows
Whilst having a nice bacon sandwich for lunch I noticed some young Swallows perch on the telegraph wires being fed by the parent birds, so without further ado I set up the camera  to see what I could get. I now understand why some off these wild life film makers have to spend weeks or more on end filming for a few moments of what they are after. I let the camera run for about 10 minutes OK! to be honest the bloody battery ran out again, I'll have to purchase a back up but I'm quite pleased with the result.
Rainbow
Did anyone notice the rainbow that arched the valley at about 8:40pm?  I know I'm waxing lyrical here but it is the most wondrous rainbow I have seen in my life. The photos I took doesn't do it justice what so ever. The enormity of the phenomenon was such, it was impossible to capture it in its entirety. Inside the arc the light was like a warm summers evening and outside the arc it was dull and threatening. The rainbow was absolutely perfect and the colours so intense I have made no adjustment to the photos. You'll have to forgive the house roofs but that was beyond my control. Notice the double rainbow in some of the photos. 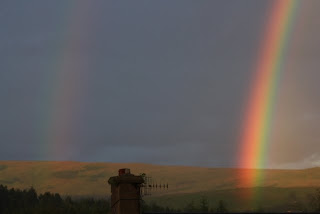 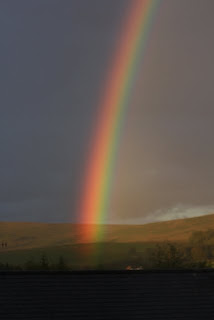 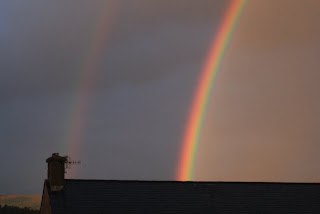 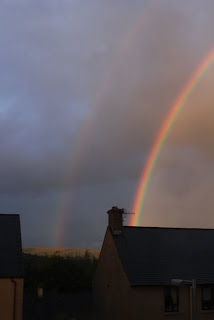 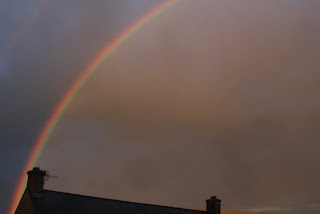 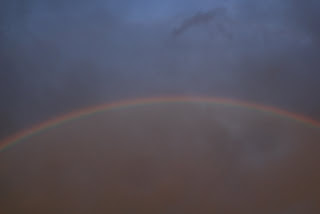 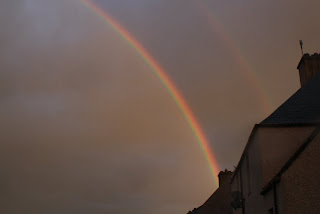