Over in a flash

I've been on holiday all week as it's half term. As with most holidays they are over in a flash and you wonder what you've done with your time. I spent quite a lot of my time entering new photos onto the website. These were photos of Princess Margaret's visit to the Academy in June 1977, the year of her sister Queen Elizabeth's Silver Jubilee. Before that on Sunday I watched Scotland suffer at the hands of the Welsh. Scotland looked quite good but due to bad mistakes and some bad luck they through the game away as it seems to be the norm .
A lovely morning
On Tuesday morning I decided to go and see the snowdrops at Holmhead. After crossing the Jubilee Bridge I turned left to go along the riverside path on the north side. The going was rather treacherous due to the slow thaw and the amount of pedestrian traffic compacting the snow into ice. When I reached the Duchess bridge I turned off and took the middle road towards Holmhead, as it was away from the river it was clear of any ice or snow. It was a lovely morning and there were a few signs of spring about.


a carpet of Snowdrops
I spent my early years of life at Holmhead, (my Grandfather was head keeper at the time.) and as far as I can remember there has always been a carpet of snowdrops in the wood at the front of the house. After putting the camera to good use I headed for home. 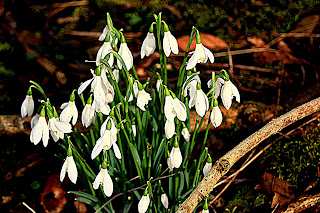 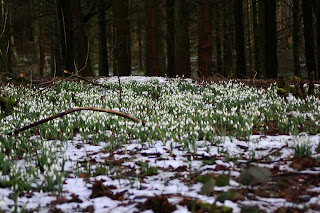 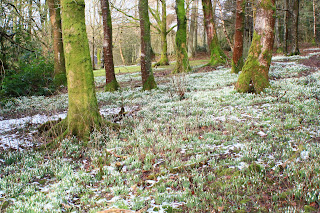