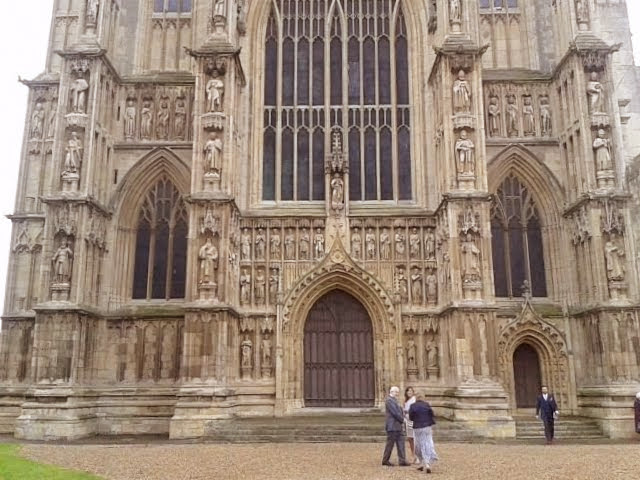 I think I've just about recovered from a busy weekend in Beverley, which is situated in the East Riding of Yorkshire. This was to attend the wedding of the daughter of a very old friend. They were married in Beverley Minster which is quite breathtaking. The bride and groom made a very handsome couple and their exuberance spread amongst the guests creating a wonderful happy relaxed atmosphere for the rest of the day. 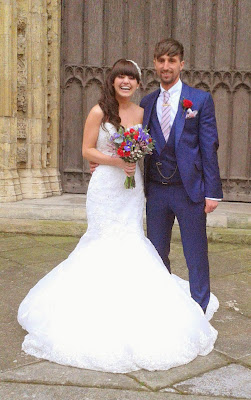 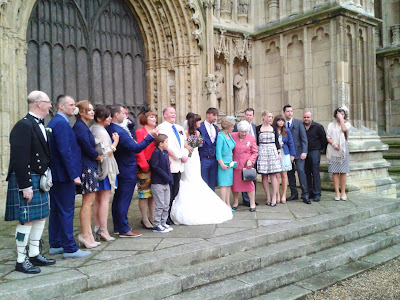 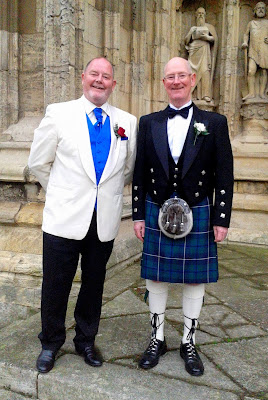 Father of the Bride & Uncle Kenny 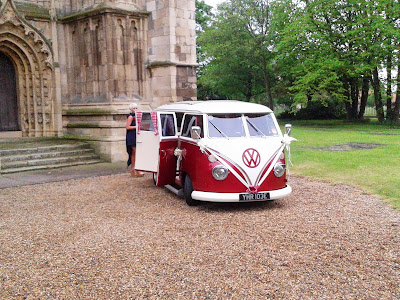 Transport for the bridesmaids 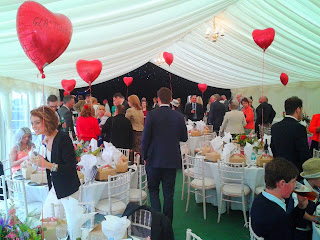 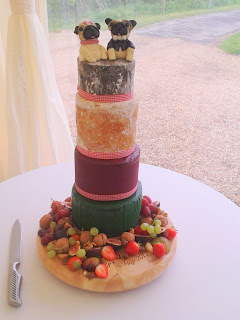 The wedding cake. This was ingeniously made of various cheeses which we sampled along with some delicious pate' later in the evening. 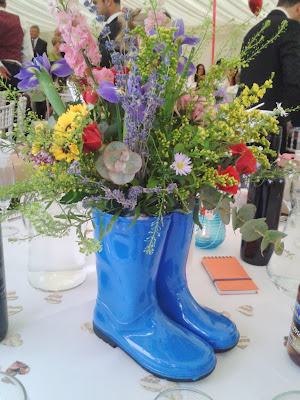 These table centre pieces were either blue or red wellies. 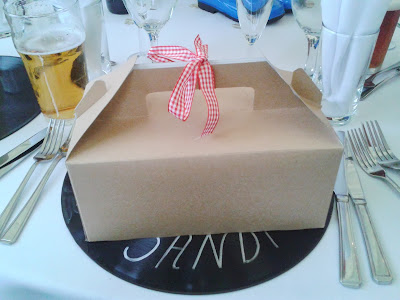 Each guest was presented with a mysterious looking box at the start of the meal. 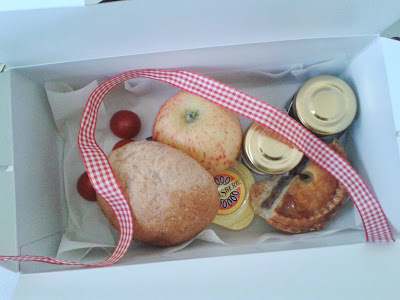 This is what was inside, a little picnic as a starter


It was busy in my street this morning with lawnmowers and strimmers buzzing away so I joined in and cut the front lawn. I also found time to plant some onion sets in one of the small vegetable patches. Shortly after lunch I received a call from Tootlepedal to see if I was interested in a little expedition later. I called for him at 2 pm as arranged and as neither of us were up to anything strenuous we opted for a visit to the moorland feeder station. 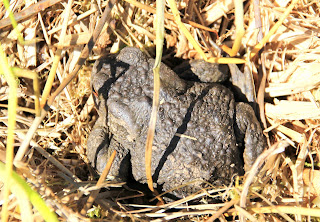 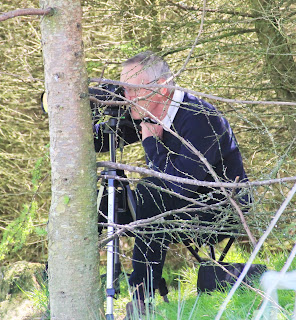 Tootlepedal opted to sit in the bushes. 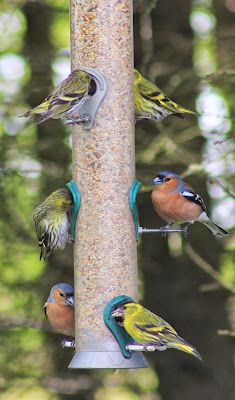 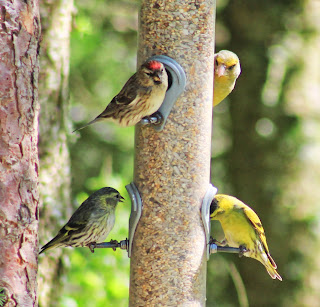 These two photos were the best of the bunch that I took.

After a while a cold wind got up and despite the shelter of the hide, it was blowing my way so I suggested a trip up Whita to see if their were any sign of the Hen Harriers. We had only waited about ten minutes when the male harrier appeared the female rose out of the heather and we witnessed a mid-air food pass. Kenny Bell stopped and chatted for a while asking us if we witnessed the food pass. Kenny spends a lot of time on the moorland and has a good local knowledge of the area.

After a quick cup of tea at Wauchope Cottage I headed home for my tea. It was quite a while before I got any tea as the Red Squirrel appeared, it had been here last night and my neighbour said it had visited over the weekend. I went upstairs and started taking photos from the bedroom window. 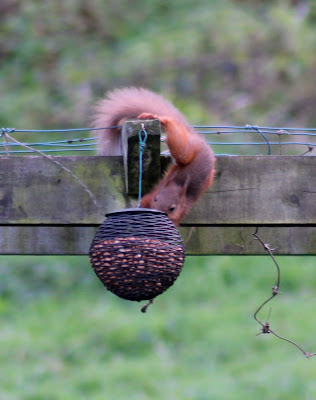 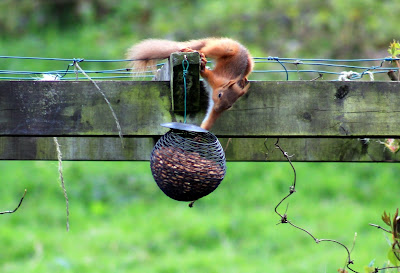 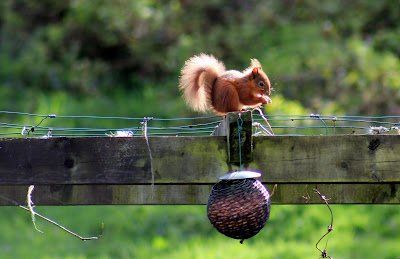 After a few shots I noticed it wasn't bothered by my neighbour who was nearby. I went into the garden and got as close as I could it was so engrossed in eating the nuts it never noticed me and when it did it just sat and stared at me. There's nothing new on the Blue Tits at the  moment. 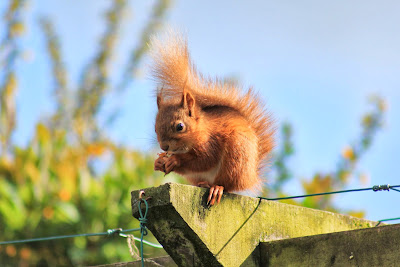 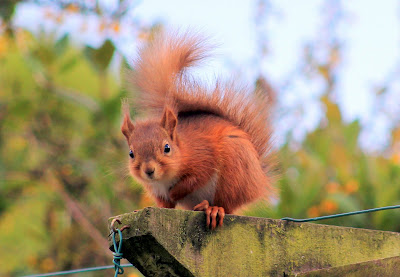 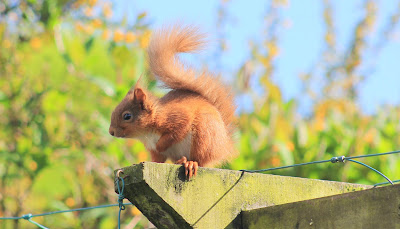 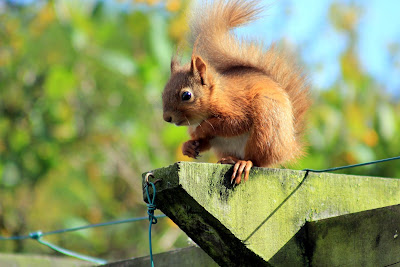 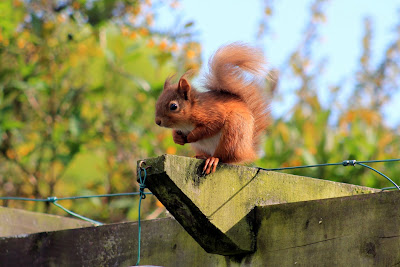 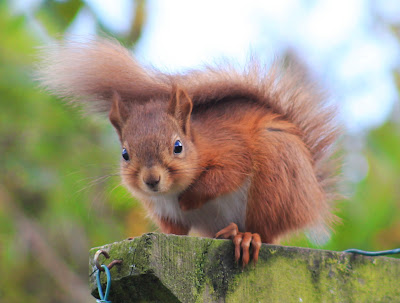