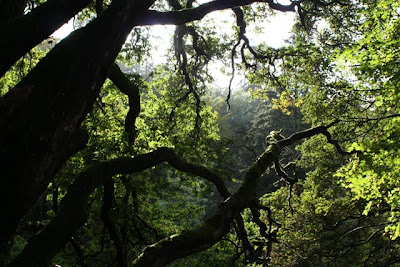 Nice to be back
I've been back to college almost four weeks now, and I must say it is quite nice to be back. There has been big changes in the refectory, Interserve took over just before the summer break and we now have a lovely revamped dinning area, three wide screen TV's and a pool table, which is very popular at the moment.
Wednesday 14th Sept was Freshers Fair Day which was held at the Harraby Campus. This was a busy event with students getting transported by bus to and from Carlisle College and Brampton road.
Australian Cousins
On arriving home from work on Thursday I was greeted by two Australians Barry & Pat.
Pat is a far distant cousin of Mrs Gill and contacted us through another Australian cousin that dug us up on a family tree search a few years ago, but that is a long story. It was a great shame we couldn't have spent more time together as the family connection goes back about four generations of Aitchisons who farmed at Auld Irving until Mrs Gill's granny Aitchison retired.
A Bit of a Disappointment
Soon after they had left I received a phone call from Aileen Cavers saying the local Cattle show was cancelled due to the heavy rain that day. It must have been a great disappointment to the organisers after all their commitment over the year. I was also disappointed as I had entered a few photos hoping to give Mr Tootlepedal a run for his money but I'm sure I would have been up against some stiff opposition. Never the less I headed for the for the Archive Centre picking up Mr Tootlepedal on the way. I took the opportunity to inspect Mrs Tootlepedal's garden which was looking in good order despite the recent rain we have been having.
A Railway Journey
Mr Tootlepedal put in a week of the E&L while I changed the window photos. This time I went for a railway journey, starting from Langholm travelling through Gilnockie pausing at Canonbie and arriving at Riddings Junction. This is where the Langholm branch joined the Waverley line which took you to either Carlisle or Edinburgh. Unfortunately this is a journey by memory now but it is quite nice to immerse oneself in a touch of nostalgia and what better than by steam! Afterwards we adjourned to the Douglas for a pint of Deuchars. By the way, Jean didn't join us as she had an engagement at the Buccleuch centre with Gavin.
The prospect of seeing Granny & Granpa again.
Neil arrived at lunch time on Saturday with Joe & Sandy. Kate couldn't make it as she had just done a night shift at the Edinburgh Royal where she is employed as a high dependency nurse. It was great to see them as we hadn't seen them since the Common Riding. The boys were fresh from their Saturday morning swimming lessons and were full of excitement and energy, hopefully due to the prospect of seeing Granny & Granpa again.
Chunky bread, soup & pizza
After a hearty lunch of home made vegetable soup, chunky bread and pizza I was asked by Sandy if I would take them for a walk.
Not for the Faint Hearted

Going for a walk with this pair isn't for the faint hearted, their energy knows no bounds.
We followed a varied route through woods & hillside. There was much swashbuckling on the way, Joe armed with a wooden sword and, Sandy not to be outdone, was packing a state of the art weapon known as a nibby.

We entered the wood at the top of the Galaside and followed the wall that runs parallel to the road heading towards Eskdalemuir. This involved traversing narrow paths across deep ravines.

Crossing the main road we followed a path through a dense wood up towards the new forestry road.Granpa was volunteered to lead the way on this part of the quest.
They both battled bravely against an enemy in that was in the guise of dead vegetation, but they were no match for the two brave Knights. As we approached the main road we were met by Tommy Morrison and his son who were out exercising their horses. 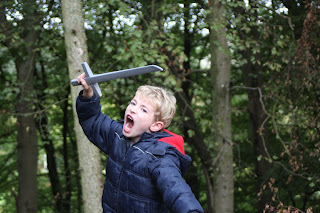 After many adventures we ended up on the Castleholm where the boys collected conkers and promptly laid siege to Langholm Castle. This was done very quickly as our tummies were telling us it was getting near tea time, and Granny was preparing a banquet for the victorious knights. 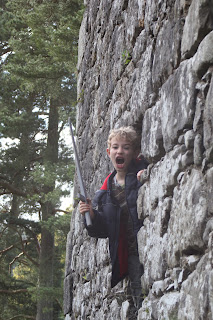 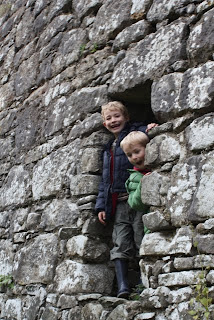 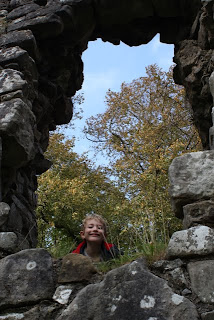