A Natural Phenomenon
Last Monday I received a rather excited phone call from Fred. Apparently when he was out in the Lakeland fells with his walking group they had come upon a natural phenomenon called a  Brocken Spectre. This is when the clouds act as a canvas and the subject is projected on to the clouds surface. I believe many walkers and climbers can go a life time without experiencing this occurrence so he was thrilled, not only did it happen once but it occurred three times during their walk. If you look closely at the following photos you will see a faint rainbow around the spectre, this is known as a Glory, which must make the whole experience very weird and if you didn't know about it, rather unnerving I would imagine. Fred gave me kind permission to use the following photos. 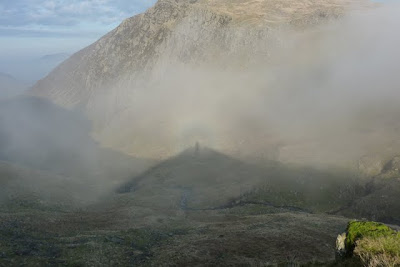 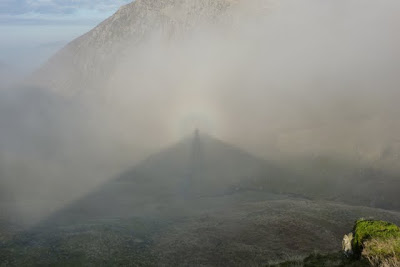 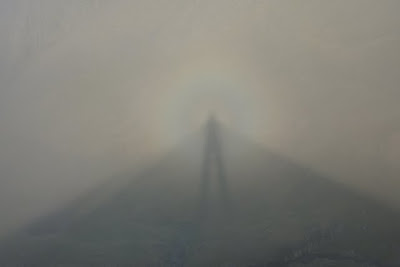 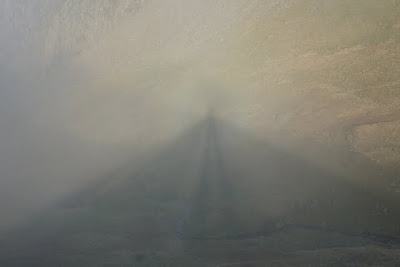 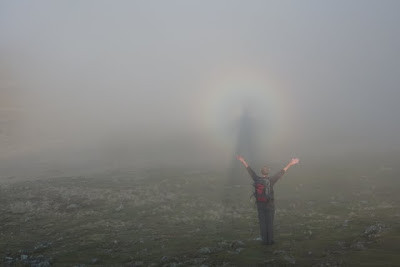 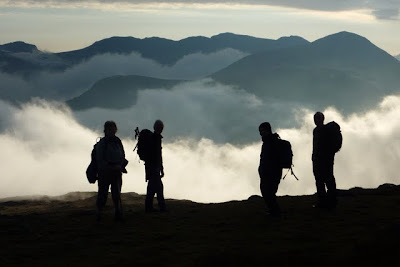 An Uneventful Week
The week on a whole has been uneventful. I planned at some point over the weekend to try and photograph the starlings at Gretna but due to the wet, snowy miserable weather we have had over the weekend, that idea was abandoned quickly abandoned.
A chore I don't mind
Saturday was spent preparing photos for the Archive web site. They all have to be resized and a copyright inserted, but thanks to the wonders of Photoshop this can be done automatically which saves an enormous amount of time. Unfortunately adding the information is rather a different matter, but it is a chore I don't mind too much. The information that unwittingly gets stored in ones memory bank can come in handy at times when someone asks for relevant information.
A Tidy Shed A Tidy Mind?
On Sunday Mrs Gill asked me to put the begonias up in the attic for the winter. They have been stored up there for about twenty winters now and still produce an outstanding display come the summer so the conditions must be favourable for them. While I had my head up through the trap door I had a good look at the recent insulation that had been installed earlier in the summer so we should be very cosy looking at the thickness and amount that was laid. As I was in the mood I decide to tidy up my beloved shed. I don't know what it is but if I tidy up the shed I feel my mind has been tidied up as well and it is a nice feeling, maybe i should do it more often.
Posted by Sandy at 14:33