A small exhibition
Recently church elder John Scott gave me a list of church photos from the Archive website and asked if he could have copies made to stage a small exhibition in the Kirk for which we were more than happy to oblige.


400 years
John tells me this is to celebrate 400 years of the Church of Scotland being in Eskdale. Sadly when I looked on the C of  S website for further information, I couldn't find any reference to Eskdale or Langholm for that matter. John informed me that the exhibition will run all year and be on display Monday to Saturday 2pm - 4pm. 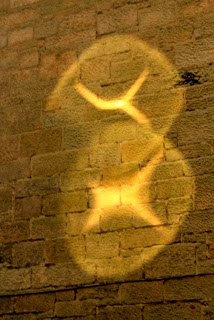 A wee danner
After lunch on Saturday I decided a visit to the exhibition followed by a wee danner round the Castleholm would be in order as the weather was quite favourable. On the way to the Kirk I was struck by this reflection that was coming from a pair of sattelite dishes. I thought the shapes of crosses in the reflection was rather appropriate to my destination.
The merits of photography
Just as I arrived at the Kirk bridge I met fellow photographer Stanley Wilson. Stan has been taking photos for a number of years now of which local wildlife is his speciality. I think he has probably established himself as one of the premier photographers in the area. Stan is one of our local postmen and gets some excellent photo opportunities when he is on an early morning country run. As we were discussing the merits of photography we were approached by Margaret Johnstone to see if we would be interested in staging a joint exhibition in the Town hall gallery. We said we would be more than happy to do so and I said I would approach Tom Hutton if he would be interested in joining us. Margaret said they need on going exhibitions to keep the gallery going and as the tourist office will be opening in the next few months it is an added attraction to visitors. After a good discussion with Margaret and Stan I entered the Kirk to see the display.

Well worth  a visit
I thought the exhibition was well worth a visit and would advise any to pop in if they are passing at some point. People and organisations spend a lot of free time setting up displays and presentations to show off their work and talents and should be supported. " oh! I meant to go but was too busy" is a familiar cry, for which I am as guilty as anyone.
After spending so much time blethering the light was beginning to fade so I had a hurried walk round the new path on the Castleholm.
Posted by Sandy at 15:04