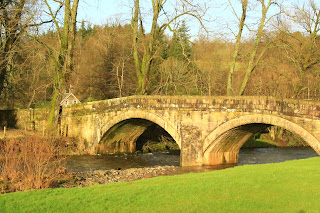 Muckle Toon Whisky Run
We were welcomed into the New Year with some bright sunshine. So after a quick breakfast I drove down to the Kilngreen and parked the car. I set off to go round the Castleholm when I was met by athletes taking part in the annual New Years day Muckle Toon Whisky Run. The participants start off from the Health Centre car park  heading up the Galaside towards Burnfoot bridge returning by the Langfauld. The winner receiving a bottle of whiskey. This event was the brainchild of Charlie Graham and some like minded friends and has been an annual event for approximately 26 years and attracts upwards of 40 entrants from near and far. 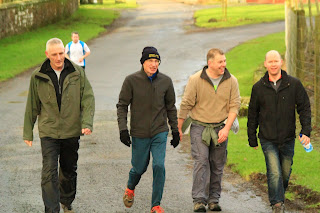 Ewan Barnfather, Owen Brown and friends decided to walk the course this year. They seemed very cheery and wished me a Happy New Year. 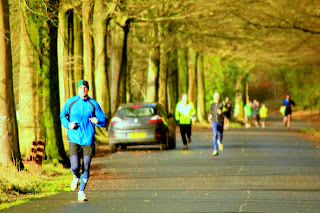 Soon the runners were coming thick and fast and most seemed to be enjoying the run and still had enough breath to wish passers by all the best for the coming year. 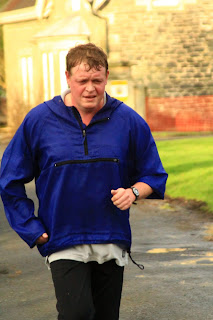 Local runner Paul Warwick, who seems to have been having a bit of a gruelling time. Hot on his heels his father Robert. 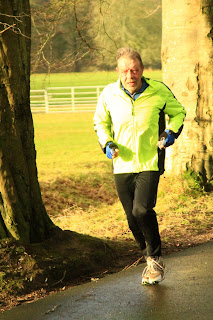 Catching up
After most of the runners passed I met Linda Roddick who is a friend of my cousin Catherine Milligan. We caught up with recent events and she told me how much she was enjoying retirement.

I continued my walk meeting several people who were in a similar frame of mind and were out to make the most of the good weather. 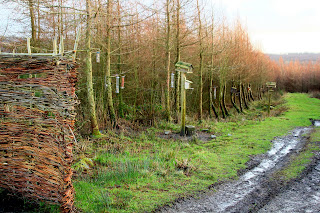 In the afternoon I decided to visit the moorland bird feeding station which was a bit of a disappoint because there was little activity so after a good half hour in the hide with no results I decided to return home and see what I could photograph on my own feeders. On reading Tootlepedal's blog later, I obviously had missed the feeding frenzy after he and Mrs Tootlepedal had filled the feeders.
More productive
My own feeders were much more productive so I set up the camera on a tripod and left to run on the video setting. I took the following two photos as stills from the video and I'm quite pleased with the quality. 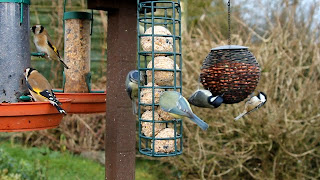 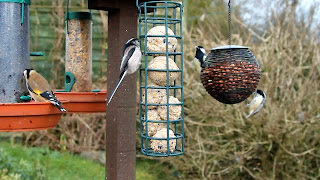 To watch this video click on the You Tube icon at the foot of the photo
Posted by Sandy at 08:13

Email ThisBlogThis!Share to TwitterShare to FacebookShare to Pinterest
Labels: 2012, Birds in the Garden, January, Photography, Walks